Frequent consumption of turmeric, this is the impact on your body! 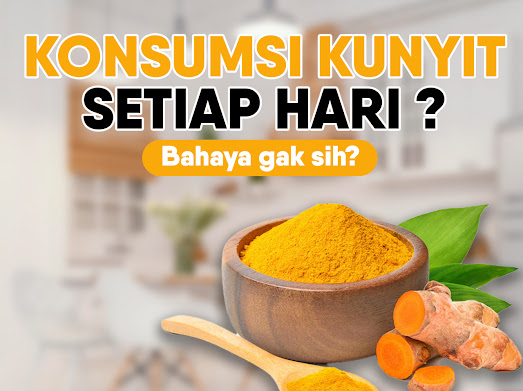 Turmeric itself is one of the herbal plants that can be used as a cooking spice, because this plant is included in the spice category which is quite popular in Central America to Asia, including Indonesia.

It's not just a flavoring for food. It turns out that turmeric can also be used as natural medicines. Turmeric itself has a dark color because it contains curcumin. It is an active ingredient that has an anti-inflammatory effect, besides that turmeric can also increase endurance and prevent various diseases, one of which is ulcers and flatulence.

According to the University of Maryland medical center, curcumin has also been shown to have antioxidant properties that can fight free radicals and thus prevent various chronic diseases.

Turmeric has long been believed to be used as a natural remedy for digestive disorders. So when ulcer symptoms come, turmeric is always the first choice to relieve the pain.

According to research from the journal Pharmacognosy Reviews looked at the effects of curcumin to treat inflammation caused by wounds and protect the stomach from these irritants by increasing the production of mucus in the stomach wall.

The curcumin in turmeric can help the muscles of the digestive organs to move smoothly as they should to reduce gas pressure in the stomach. Turmeric also helps the stomach stop producing excess acid that causes flatulence.

Turmeric mixed with black pepper is believed to relieve nausea, a study in the journal Food in 2017 proved that the addition of black pepper helps the benefits of yellow spice feel more leverage.

After consumption, the curcumin content in turmeric is slowly absorbed into the bloodstream, this makes you lose the efficacy of turmeric itself. The study showed that piperine in black pepper can increase the absorption of curcumin up to 2,000 percent faster into the blood.

In addition to consuming turmeric to treat ulcers, now there are herbal medicines that are practical and have better properties for treating ulcers and flatulence, ALBUSE is an herbal medicine to relieve symptoms of stomach acid, flatulence, nausea, vomiting and hot throat, and prevent recurrence.

Curcumin itself is a pure extract of turmeric without the content of essential oils, the combination of curcuminoids with honey has a better effectiveness to treat digestive disorders than giving turmeric or honey alone.

According to the Andalas Health Journal, in 2018 the combination of curcuminoids with honey had a better effectiveness in reducing gastric ulcers due to aspirin or pain relievers.

In addition, the benefits of consuming Albuse can protect the stomach lining from inflammation/damage due to NSAIDs, unhealthy food & drinks, & H. pylori bacterial infection, reducing pain, bloating and excessive gas in the stomach.

Albuse itself is already available in e-commerce such as Shopee and Tokopedia. 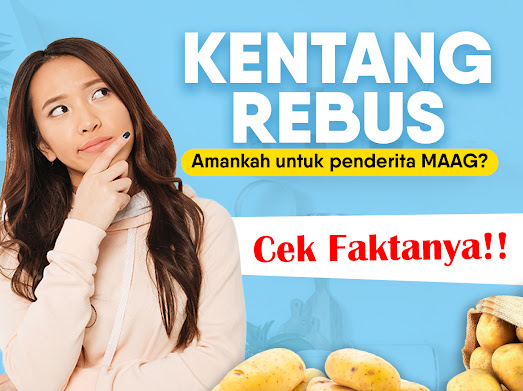 Can People with Stomach Acid Consume Boiled Potatoes?
At the beginning of this year many people made various resolutions, ranging from financial resolutions to health, a healthy lifestyle trend began to develop in today's society by maintaining the right diet along with regular exercise can help prevent stomach acid disease from recurring. For sufferers themselves, it is necessary to avoid certain types of foods that can cause stomach acid to rise up into the esophagus. In addition, irregular eating patterns can cause various diseases. So how people with stomach acid can consume boiled potatoes. Boiled Potatoes Are Good For Stomach Acid Sufferers Through the BBC GoodFood page, boiled potatoes themselves include foods that can be consumed for people with stomach acid disease. As is well known, potatoes themselves are high in carbohydrates and fiber and low in calories, this is what makes the feeling of fullness last longer. In addition to being high in carbohydrates, boiled potatoes also contain various vitamins ranging from potassium, vitamin C, folate, vitamin B6, and several types of antioxidants that are good for the health of our bodies. However, people with stomach acid disease who have high blood sugar levels should consult a doctor first before consuming boiled potatoes. Reporting from Healthline, potatoes themselves are a source of carbohydrates with normal sugar levels and have a high glycemic index. Thus, diabetics are advised not to consume these foods too often. Herbal Medicine for Stomach Acid In addition, when stomach acid comes, it is better to immediately treat it with the right medicine, herbal medicine is the right choice to deal with stomach acid. ALBUSE is a honey with a combination of curcuminoids which is useful in protecting the lining of the stomach wall from inflammation/damage due to NSAIDs and reducing pain, bloating and excessive gas in the stomach. Plus honey itself as the main ingredient which is useful for protecting the stomach wall so that it can help treat gastric ulcers due to the use of non-steroidal anti-inflammatory drugs (NSAIDs) which have an effectiveness equivalent to chemical drugs (cimetidine) for ulcer treatment. Albuse itself is already available on Shopee and Tokopedia, so what are you waiting for, please buy it. 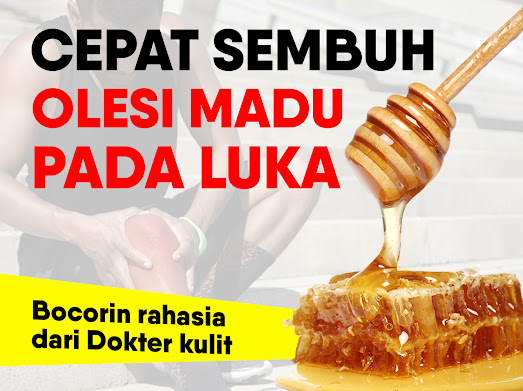 Can Honey Really Make Wounds Heal Faster?
It is not surprising that honey is called one of the most beneficial food ingredients. Not only useful for skin health and beauty. It turns out that honey can also help speed up wound healing. This ingredient, which is often used as a natural sweetener, has long been used to treat torn wounds and burns. So, how can the truth be scientifically proven? Apart from being a natural sweetener of honey for food, honey is also often used for facial masks to soften facial skin. Quoting from a scientific review in the journal Wounds, honey itself has a myriad of components that have benefits for treating wounds. Here are the properties of honey that can help the recovery process, both open wounds and closed wounds. 1. Inhibits infection in wounds Honey itself contains many antibacterial compounds, including nitrogen monoxide which works by triggering an immune response, reducing inflammation, and inhibiting the movement of bacteria. Meanwhile, hydrogen peroxide can kill bacteria around the wound area, stimulate new cell division, and provoke the emergence of macrophages, which are white blood cells that eat bacteria or other foreign substances that are considered threatening to the body. 2. Accelerate Wound Recovery Honey itself has benefits that can accelerate wound recovery that comes from its low pH, which is between 3.2 to 4.5 Ph. This low pH value describes the level of acidity of a solution. When applied to wounds, the low pH of honey can prevent protease enzymes. This is very important in wound healing. Because if there is a protease, this enzyme will break down the protein so that the wound becomes difficult to heal. 3. Prevents scars When we are injured, it usually leaves a scar that is difficult to remove, to prevent it honey has benefits that can prevent scarring. Inflammation in the wound can trigger the formation of free radicals, over time free radicals will stimulate the production of excess collagen which causes the formation of prominent scars or keloids. Antioxidants contained in honey can ward off free radicals in wound tissue and prevent the formation of keloids, when applied to wounds the antioxidant content can stimulate cell division to form smoother skin tissue. Now there is an easier way to treat wounds by simply applying Buragel to the wound or you can apply Buragel to gauze and then apply it to the wound. Buragel itself contains honey as the main ingredient which is useful for wound healing, honey can also inhibit infection in wounds to speed up wound recovery. Plus the aloe vera content can make the wound environment moist and help the formation of new blood vessels. Buragel itself is available on e-commerce shopee and Tokopedia.
Here's How to Know Someone Has Sexual Narcissism
Sexual narcissism involves many of the same traits as narcissistic disorder. This behavior can appear consistently. However, sexual narcissism often appears in the context of sexual interactions and relationships. People with sexual narcissism feel they deserve sex and have the right to demand it whenever they want, are selfish, and feel they have the most power in sex. People with sexual narcissism also develop less emotional intimacy and show little interest in what their partner wants. In fact, it is not uncommon to manipulate or force a partner to fulfill their sexual needs. Too proud of his sexual ability In general, sexual narcissism involves many of the same traits as narcissistic disorder. This behavior also appears consistently, but for sexual narcissism it often appears in the context of interactions and sexual relationships. What are the signs that someone has sexual narcissism? - Demanding more on partners in sex - Doing manipulation in sex - Don't care what your partner wants - Thinks that he is the best sex partner - Feels annoyed when his sex partner exceeds his ability Sexual narcissism itself is an unhealthy behavior. Lack of sexual concern and consideration of partners is something that is not good. It can also lead to infidelity which can end a relationship. Sexual Narcissism Treatment Currently, there are no medications, treatments, or medications to treat NPD, narcissistic traits, or sexual narcissism specifically. However, psychotherapy can be beneficial and allow people to understand their behavior, manage their emotions, and take responsibility for their actions. It can also help them build self-esteem and healthier relationships. Although not many studies have proven about the treatment of sexual narcissism. Narcissism itself can decline with age. However, intimacy in sex in bed can still be increased to satisfy a partner, one of which is by consuming male and female vitality drugs CONNAX is believed to help increase desire, arousal and orgasm by increasing Dopamine levels, increasing libido and hardening and lasting. The content of White Ginseng can increase stamina during sex so that sex becomes more enjoyable, as evidenced by researchers at the University of Maryland Medical Center in the US, ginseng is able to increase the number and quality of sperm cells. As well as ginseng which includes herbal ingredients can help overcome premature ejaculation.